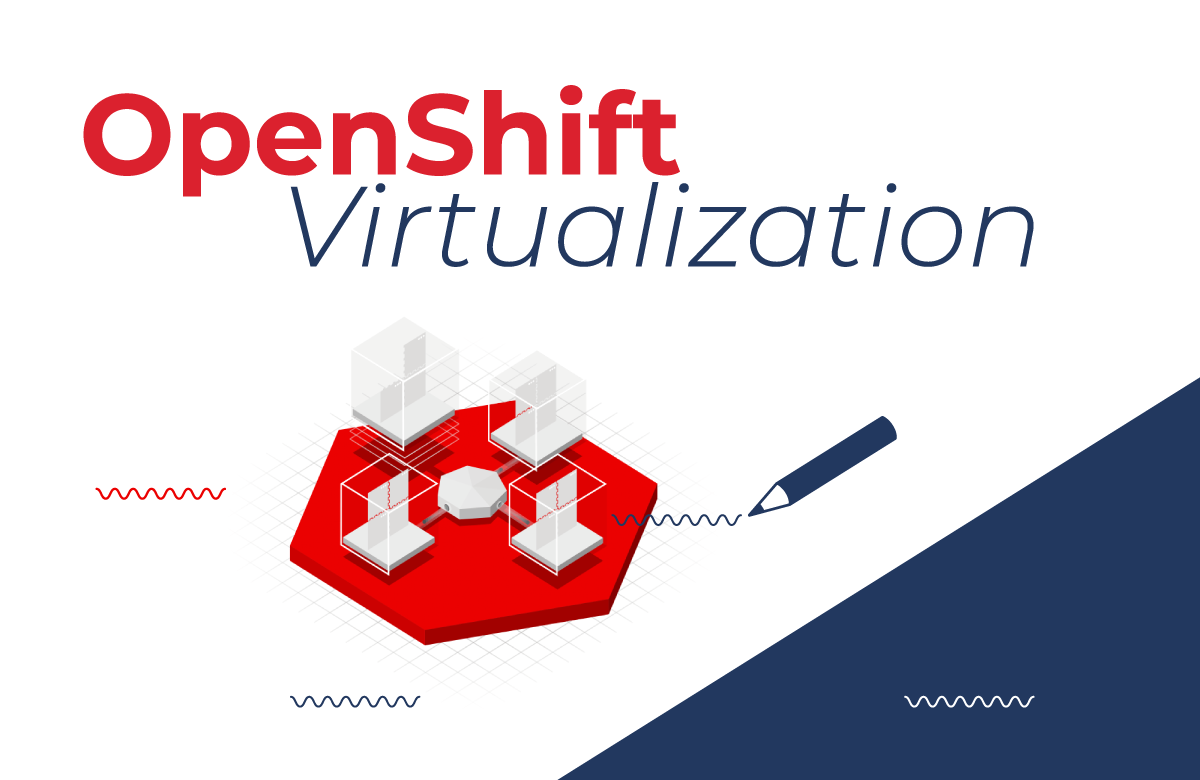 OpenShift Virtualization (based on upstream KubeVirt CNCF project) has been introduced recently as a feature of OpenShift which implements the deployment and management of virtual machines utilizing Kubernetes constructs, such as PVCs and pods. Seamlessly integrating the world of virtualization and containers is no small engineering feat, however the implementation uses the same familiar and trusted Linux technology stack that has existed for many years, built on a foundation of Red Hat Enterprise Linux and KVM.

Let’s take a deeper look at the technology behind OpenShift Virtualization and how it’s simplifying the integration of virtual machine-based and container-based application components into a single solution that works for both.

Containers use Linux Kernel technology, specifically namespaces and cgroups, to provide isolation and resource control to a process. Normally, we think of those processes as being something like Python, Java, or an application binary, but they can, in reality, be any process like bash or even system tools like Emacs or vim.

Virtual machines, when viewed from the perspective of the hypervisor, are also processes. Rather than being an application process, it’s a KVM process which is responsible for the virtual machine’s execution.

The container image brings with it all of the tools, libraries, and binaries needed for the KVM virtual machine. If we were to inspect the pod for a running virtual machine, we see the qemu-kvm processes and helpers. Additionally, we have access to KVM-centric tools for managing VMs like qemu-img, qemu-nbd, and virsh.

Since the virtual machine is a pod, it inherits all of the functionality of a pod from Kubernetes. Scheduling guidelines like taints, tolerations, affinity, anti-affinity, and benefits of pods like high availability all apply automatically just like with non-VM pods. However one difference is that pods are not migrated from host to host in the same way that we would usually expect a virtual machine. If a node is drained, we would expect the pods to be terminated and rescheduled to other nodes in the cluster. With a virtual machine it’s usually expected that a live migration happens.

To accommodate this, a live migration CRD was created with the specific task of initializing, monitoring, and managing live migrations of virtual machines between worker nodes.

When cordoning a node, virtual machines which have an eviction strategy of LiveMigration will automatically have migration tasks created for them. This also gives the application team the option of controlling the behavior of their virtual machines. They can choose whether VM requires live migration or they want to treat the VM like a container and have it to be terminated and rescheduled.

Every Kubernetes deployment uses a software-defined network (SDN) technology to provide connectivity between pods and nodes. OpenShift is no exception and has used OpenShift SDN based on Openvswitch as the default since OpenShift 3. However, OpenShift 4 introduced a new feature, known as Multus, which allows multiple networks to be made available and for pods to be connected to multiple networks simultaneously. 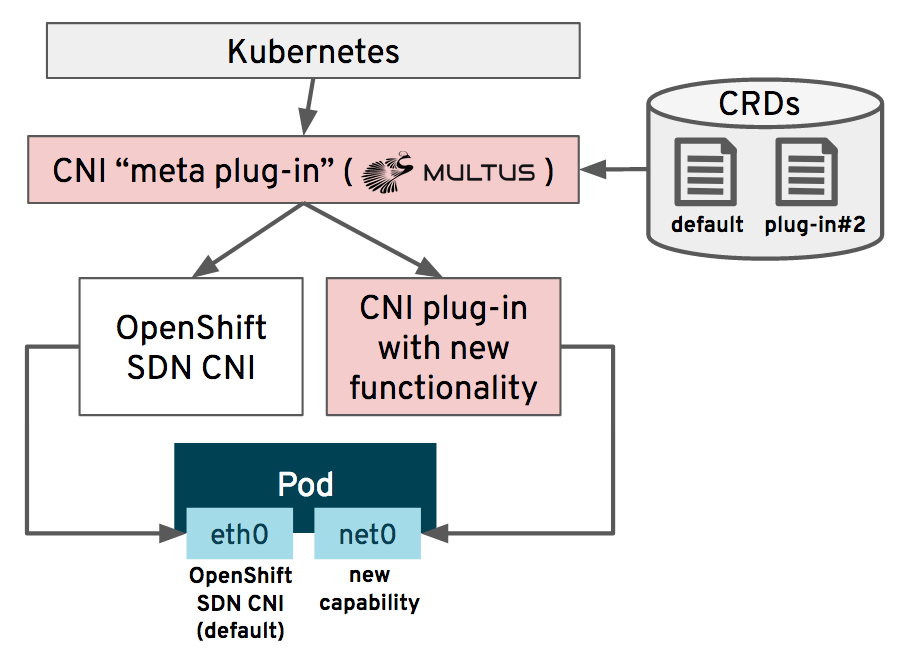 Administrators use Multus to define additional CNI networks, which are then deployed and configured to the cluster by the network operator. The pods then connect to one or more of those networks, typically the default OpenShift SDN and an additional interface. SR-IOV devices, standard Linux host bridges, MACVLAN and IPVLAN devices are all possible, depending on the needs of your virtual machine. Below we see a Multus CNI definition for a bridge network using the eth1 interface:

For a OpenShift Virtualization pod, this means that the VM can be directly connected to an external network without having to rely solely on the SDN for external connectivity. This is an important capability for virtual machines which have been migrated from another environment, such as Red Hat Virtualization or VMware vSphere, since it means that the connectivity doesn’t change so long as the layer 2 network is still accessible to the OpenShift worker nodes. It also means that virtual machines can have consistent connectivity for IP persistence, high throughput devices, and/or dedicated resources such as a guest initiated storage device without having to traverse the SDN ingress and egress path.

OpenShift Virtualization uses the native Kubernetes storage concepts of StorageClasses, PersistentVolumeClaims (PVC), and PersistentVolumes (PV), all connected using the standard storage protocols supported by Kubernetes, to attach and manage VM disks. This creates a consistent and familiar method for Kubernetes administrators and application teams to manage both containers and virtual machines. For virtualization administrators, this is a concept that many are already familiar with as it’s the same principle used by OpenStack and many cloud providers for managing the VM’s definition and storage separately.

Attaching drives to virtual machines is often more than simply creating the disk and attaching it though. Oftentimes it’s faster and easier than creating new and is a requirement when importing existing virtual machines to use an existing disk. Whether it’s a template KVM image or a disk from another hypervisor, it’s much faster than having to install the OS from nothing.

To simplify the process, OpenShift virtualization deploys the Containerized Data Importer (CDI) project, which makes importing disk images from multiple sources as easy as an annotation to the PVC.

The annotation triggers CDI to take action, at which point we will see a series of actions happen, as seen below: 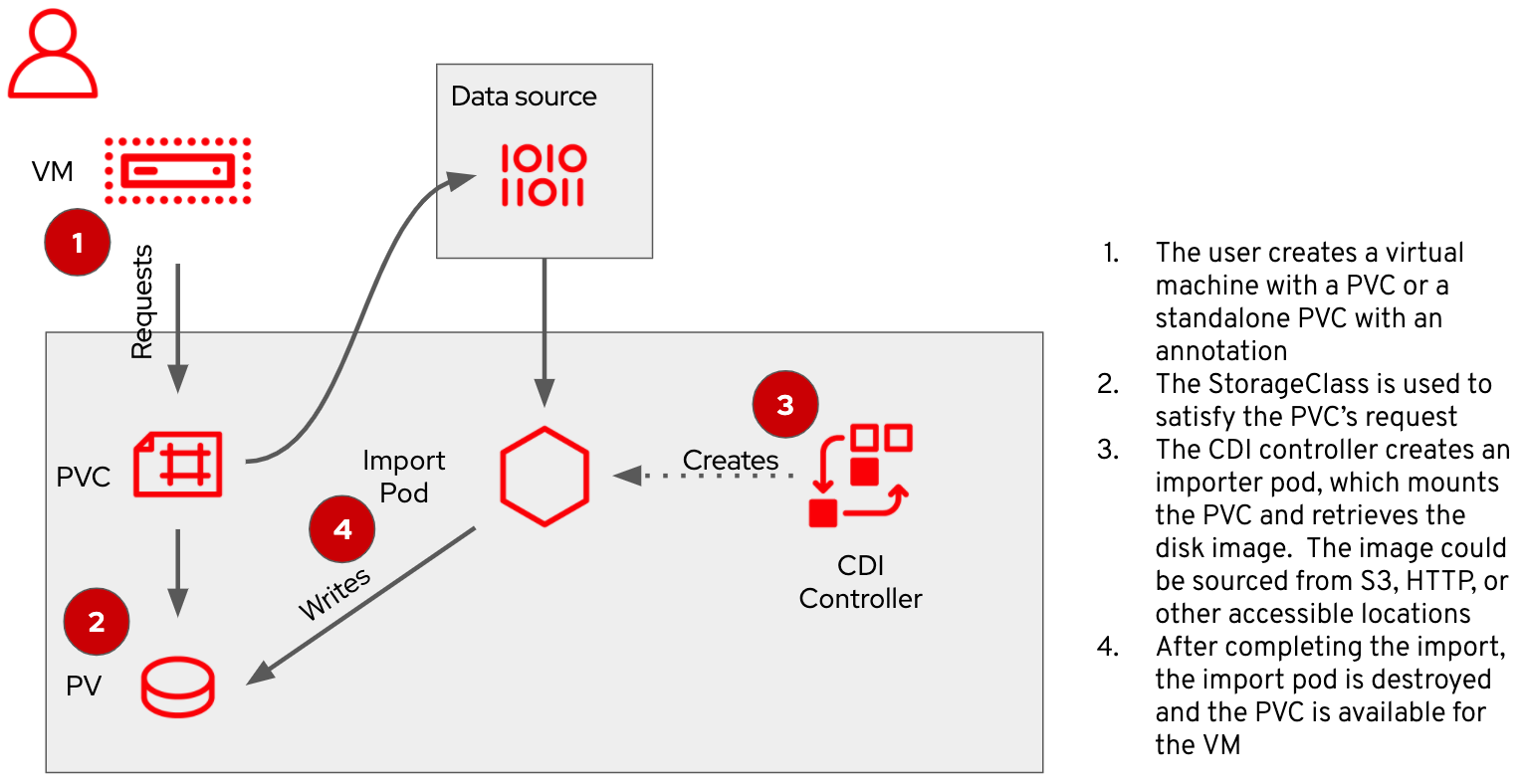 When CDI is done, the PVC contains the disk for the virtual machine and it’s ready to be used, including any format conversion that may have needed to happen.

If you’re interested in testing and experimenting with integrating your applications hosted in virtual machines with OpenShift Virtualization, it is available as a tech preview in OpenShift from version 3.11 to 4.4 and fully supported since OpenShift 4.5. If you are a current OpenShift customer you have access to it as part of your current subscription, there is no additional cost or entitlement needed.

For more information, be sure to visit the OpenShift documentation for installation instructions and visit try.openshift.com to get started with OpenShift.

Jaroslaw works as an Principal Solutions Architect at Red Hat and is responsible for delivery and solution selling based on Red Hat Openshift Container Platform and Red Hat Application Services in the region of Central and Eastern Europe.